Experiencing the best of Ireland on Fam trip

CTA communications director Helen Bowron took part in the recent Fáilte Ireland Fam Trip which proved to be a cracking event with visits to some fascinating attractions and destinations that would love to welcome your groups.

CTA members know that Ireland is a great destination for coach tour holidays – a fact that was made very clear during a recent fam trip for British coach and group operators organised by Tourism Ireland, Tourism Northern Ireland and Fáilte Ireland that I was lucky enough to join.

I actually joined my colleagues on the last morning of the Northern Ireland segment of the trip. They had all met in Belfast two days before for a busy time that included: Hillsborough Castle and Gardens, the Lords Mayor’s Chamber and Palace of Demesne in Armagh. They also went on a tour of Vicars Hill, Armagh Robinson Library and the Church of Ireland Crypt, plus an afternoon visit to the Navan Centre and Fort archaeological site. The tour ended with dinner at the Armagh Cider Company and entertainment by the Armagh Rhymers. They then stayed at the Armagh City Hotel. The next day started at the Bakehouse in Bellaghy, followed by lunch and the Northern Ireland Coach and Group Workshop at the Waterfoot Hotel in Derry–Londonderry. Fifty Northern Ireland hospitality suppliers attended the workshop. In the evening, there was a networking dinner with entertainment at the Guild Hall in Derry-Londonderry.

On my first morning, I joined the Derry-Londonderry guided walking tour of the City Walls, stopping at the Derry Girls mural. We then visited the Cottage Craft Gallery for a dance performance and bread tasting. Next, we boarded the City Sightseeing bus, stopping off to visit the City Hotel, to view its new top floor rooms and terrace. Afterwards, we drove over the river Foyle with views of the Freedom Bridge, then had lunch at the Walled City Brewery, where the Northern Ireland Fam trip finished. 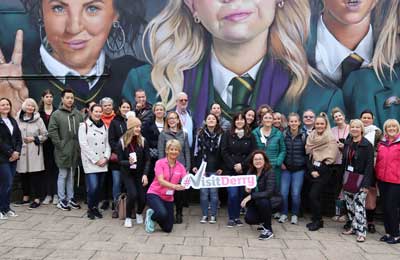 The Fáilte Ireland Fam trip departed after lunch and visited parts of the Wild Atlantic Way in County Donegal, Ireland’s hidden heartlands in Co Leitrim and Dublin. After a scenic drive, we reached the Fanad Head Lighthouse and had a guided tour including a climb to the top for stunning views of the Fanad peninsula. Our overnight was at the Radisson Blu Hotel, Letterkenny. 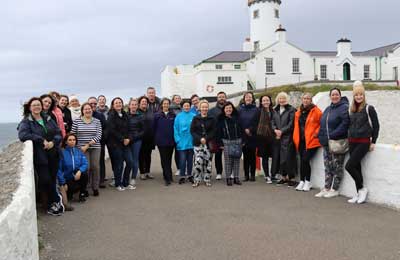 The following day our coach drove us to Glenveagh National Park and Castle, nestled in the Derryveagh Mountains. The front of the castle has lake views and the walled garden, grounds and woodlands lie to the rear and side of the castle and beyond. We joined a castle tour followed by freshly baked scones in the Courtyard Tearooms. 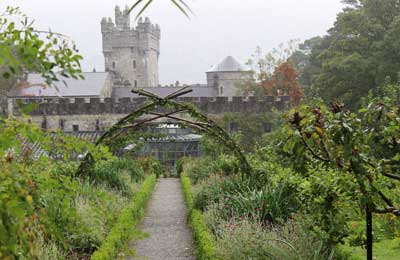 We then drove to Leo’s Tavern in Meenaleck Village and were welcomed by the owner Bartley Brennan. There was live music, dancing, singing and an excellent lunch followed by an Irish coffee. 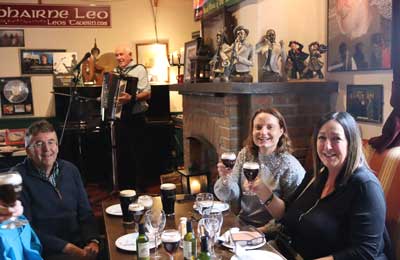 An afternoon drive to the Slieve League Cliffs took us through mountains, peat bogs and small towns.  At Teelin we were joined by Paddy Clarke for the steep drive up to the cliffs and the walking tour. Then it was on to our evening stop at Landmark Hotel in Carrick-on-Shannon, Co. Leitrim. 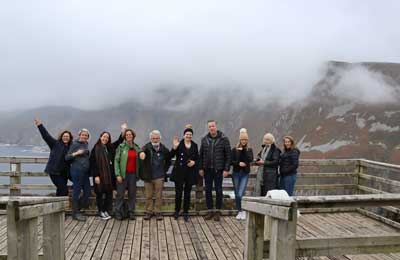 The workshop took place the next morning. The group had  a late afternoon transfer to Dublin for the farewell dinner and Irish House Party at the Landsdown hotel and overnight at the Mespil Hotel.

This was a fantastic Ireland fam trip. We visited a lighthouse, a castle, a tavern with traditional Irish music, and climbed a cliff. The hotels were all group friendly and the company was excellent. We enjoyed lively lunches, teas, dinners and conversations together as we drove through the stunning scenery.

Thank you to everyone who made it possible.